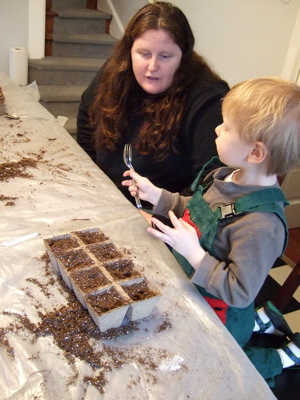 February 24: Sowing the seeds of Spring

Having finished the garden last year by digging out shrub stumps with a shovel and a six-foot pry bar, I thought I'd start smaller (and more cheaply) this year. Also, if I could get Jake to do some of the work, all the better.

Presidents' Day, Jo-Ann and I had a playdate for coffee cake and seed planting. The boys ran around like wild things, and we got tomatoes, cucucumbers, parsley, basil, columbine, poppies, and pansies planted. It was probably to early, but it was the only time I had!

After getting dirt all over the dining room, the boys ran around in the dirt outside. We played catch, and practiced batting, and I crawled into the rhodies for balls, and Jake got hit in the head. (Lesson: stand back from the batter.) It was 65 degrees and the boys wore no coats.

Friday I was shovelling snow again.

But at least my daffodils have already sprouted! Bleh. Maybe mid-February isn't to early to start seeds, what with global warming and all.

The state sent us a letter they are considering expanding Church Road. Last month the surveyors showed up, and, by simply allowing them to park on our street and not on the two-lane highway, they divulged all. Which, admittedly, was not much. They didn't know if it's to expand the shoulder, put in turn lanes at the lights, put in a center turn lane the whole block, or change to four lanes the whole way.

PennDot's web site is, of course, useless. there's no way to search it. Googling only reveals years old PR and traffic notices. Fortunately, a township councilman lives half a block down the road. He's not in my district, but one hopes that as both a resident and a politician for the area concerned, he'll know what's in the plans. Of course, I haven't managed to call him yet.

The result of this is that I want to spend NO money on the yard because at the very least some of the yard may get dug up, at worst, we'll sell and move somewhere quieter.

On the bright side, if we do stay, I"m fighting tooth and nail for sidewalks to be installed on both sides of the street. It's idiotic that I live across the street from an elementary school and there are no sidewalks here; the district would have to bus Jake.

Plants are sprouting up all over, and I'm weeding as fast as I can.

Much happier after trimming the trees: ferns, huchera, azaleas, grass, snow drops, day lillies, older daffodils by the back patio.

Last year's mother's day present (my wheelbarrow) has a flat. Thankfully, it also has a valve, and I have a bike pump, and all will be well tomorrow. Even moving Jake was insanely hard on the tire. Jake and I did manage to mulch the rosebed and the front bed where we'd planted petunias.

I also have my first poison ivy reaction of the year. I thought I'd seen and recognized it before touching it. Apparently not. Very small, but very, very itchy.

May 18: Rain and rhubarb

It's raining, and I really, really want someplace I can sit outside and enjoy the rain without getting wet. This is called a porch, which would be another construction project, and I've suffered enough. Instead, I am sitting in the kitchen listening to the dishwasher, and smelling the rhubarb cake as it cools.

The garden looks like a well-kept surban yard, i.e., we have met minimum standards. The lawn is mowed, the hedges are trimmed, the beds are weeded. On the back patio, the new side table is sitting on top of the dining table, all under the all-weather cover, and making it look like we're hiding a UFO in the back yard, according to Jorj. (I just learned that Smith and Hawken sells a side table that matches the dining table, but only to the trade. What idiocy. I'd much prefer the style of the dining table to the teak-inlaid-in-aluminum that I got. They seem determined to keep the really cool, modern stuff from their customers. Everything I've bought is only available on the web, not in stores or event the catalogue.)

Jorj did a lot of work in the yard yesterday. Most importantly, he found my rhubarb under the weeds and pachysandra that are overtaking the former vegetable garden patch. It's only as big as my outspread hand, with less than half a dozen stalks. It's over ten years old; it should be up to my knees. Between the shed and the weeds, it's gotten no sun at all this year, but has managed to survive. I'll have to move it this week.

The deer are particularly active in our yard this year. Turns out the Cedarbrook Hill Country Club is turning its golf course into housing. The deer diaspora have so far eaten my tulips (twice in two years -- I'll be surprised if they survive to next year), phlox, hostas, mock orange, foam flower. Do they eat the pachysandra? Of course not. They also avoid ferns, although saying that guarantees they'll nibble on the Japanese fern tomorrow.

Not only is the rhubarb now thriving (albeit small), but it looks like the peony has sent out a branch or two. (Thanks to Marsha for saying that yes, those could possibly be peony leaves, they do look like that sometimes.) It also looks like two of the poppy seedlings are taking root and are finally growing like gangbusters. With luck, I'll have a little poppy patch in a year or two.

This spring, two red maple seedlings overwintered. We're down to one now, and I'll have to transplant it soon. Hmmm, must also check the oak seedling in the back.

The cleome are starting to bloom. Garden centers actually sell them! After planting the first seedlings, I've never been at a loss for them. I've even needed to week.

Our established plants are just thrilled with the extra sunlight from pruning two years ago. Lots of daylillies and hydrangea blooms this year. Last year's lack of drought was probably a big help.

Jake and I got the last of the basil and flat-leaf parsley seedlings in amongst the tomato plants (some of which are blooming). He hoed out one parsley seedling; I'll see if I can find a replacement. We also transplanted some basil volunteers from a container into the ground. I've already had my first harvest (for uncooked tomato sauce). The tomato seedlings really took off. Some where in fiber pots (not so great), some in those just-add-water disks that can be planted directly (much better!). The fiber pots seemed to dry out too quickly. Next year I stick to a mixed gross of seedlings with the pop-up disks.

Jake's also been happy to help weed (the plastic compost bin is full) and water. Monday I did some retail therapy at Primex, who was having a sale on annuals. Shameful! It just rewards us procrastinators! More petunias (half the first batch died from under watering), canteloupe, peppers (green, hoping they do ripen to red), two kinds of salvia, and coleus for the back yard, especially the planter. Lynn will be happy. Also, taking Marsha's advice to grow where I'm planted, even if the state widens Church road and we end up selling, a container of pinks for the front bed. As yet unplanted. Every day I move it to a new position to visualize how it might look.

Last but certainly not least, the little green blackberries have appeared on the prickers. I want some netting to protect it from the birds (they get seed!) so that I can get some benefit from having this hazard in my yard.